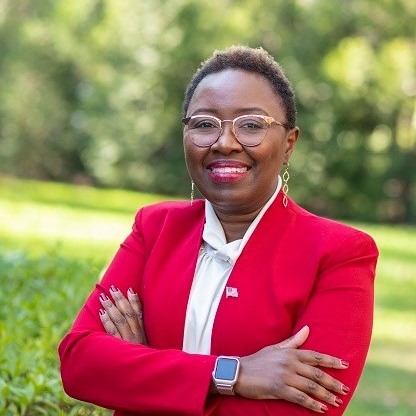 Cynthia Wallace is the daughter of Mary T. Wallace and the late Homer Lee Wallace, the first African-American county commissioner ever elected in Effingham County, Georgia, serving from 1985-2002. Cynthia grew up in Georgia, was a top honors student in high school and earned her undergraduate degree at Spelman College in Atlanta and a master’s degree in Statistics at the University of North Florida in Jacksonville. She has over 25 years in the financial services industry working for three Fortune 500 financial services companies in the area of federal regulatory compliance and risk management.

She made Charlotte her home fourteen years ago, and has been active in numerous business and civic organizations ever since. She helped to re-charter the Charlotte Chapter of NAASC and served as chapter president from 2008 - 2012, encouraging young African American women from NC to pursue higher education. She has been an active member of the Park Church South Charlotte for over 12 years and has served as chair of the 9th Congressional District of the NC Democratic Party since January 2017. Cynthia is also a certified Six Sigma Black Belt.